Ways To Get Rid Of Your Friendly Neighborhood Bees

Home » Blog » Ways To Get Rid Of Your Friendly Neighborhood Bees

Are the bees in your neighborhood becoming a bit too friendly for your liking? Have they nested in your car, house, or backyard? If so, don’t try to live with them, no matter how important to the environment you consider them to be.

The nesting bees will damage your house, and if they turn hostile, they’ll also attack you. What’s more, colonies are notoriously difficult to eliminate once they get a footing. How then do you remove them? 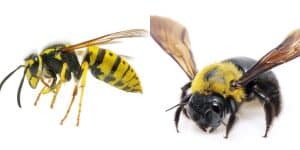 Before attempting to remove any insect, first identify its species. Are you dealing with bees or wasps?

Note that when removing any infestation, always wear protective clothing. Also, do the removal at night because bees are nocturnal. About ground infestations, you’ll be mostly dealing with the ground bee, which is aggressive and easily provoked, so be careful.

To get rid of it, locate the burrow entrance and spray a chemical pesticide deep into the nest. Then, watch for any movement over the next few days, repeating the spraying if necessary. Alternatively, pour boiling water into the nest to kill the colony or cover the entrance with a glass jar to trap and starve it out. Later, pack the empty nest with dirt.

Don’t try to remove any hive or nest that’s located deep inside a tree. Instead, seal all openings with caulk to trap the insects.

For hives that are hidden inside the walls, leave them in place and seek professional help instead. But for exposed colonies, spray them with a pesticide at dawn or after dusk, repeating the procedure until all the bees are dead. After that, remove the hive to prevent the wax and honey from damaging your walls. Also, spray exposed wasp nests, and remove them only after making sure that the colony is dead.

Car infestations are the most dangerous to remove because of the confined space. In addition, wasps are more likely to nest in a car than bees do, and any movement in the car or the sound of a running motor only enrages them. For this reason, leave such infestations to professionals. But if you must remove the colony yourself, do so only at night and in full protective clothing.

Bee removal services vary depending location and the professionals available. For instance, the best San Diego bee removal method may be chemical extermination. But away from the city, a beekeeper can relocate the bees for you. Either way, expect to pay $75 – $250 for exposed hives and anywhere from a few hundreds up to $1,400 for hidden ones.

Getting rid of friendly neighborhood bees is easy, provided you know the species of the bee that you’re dealing with. This knowledge then determines the method and cost of removal.

What Can I Do to Get Rid of Mosquitoes Naturally?

What Can I Do to Get Rid of Mosquitoes Naturally?