WE GET RID OF SCORPIONS

When you hear about scorpions, you probably picture the deserts of the southwest in Arizona and New Mexico. In actuality, scorpions can live in many different habitats, including forests, grasslands, deserts, savannas, and rain forests. You don’t want to be caught unaware because scorpions can give you a painful sting if you aren’t paying attention. For this reason, it is helpful to learn how to prevent them around your home and family.

Scorpions are arachnids that have an elongated body, eight legs, two pincers, and are commonly about 2 inches long in size. They also have a segmented tail that can be arched over the back. This tail is tipped with a venomous stinger. Most scorpion stings feel very similar to a bee or wasp sting, but others can cause severe pain and swelling. In rare instances, scorpion stings can even cause difficulty breathing or anaphylaxis. These most serious symptoms are most likely to occur in sensitive populations like the very old, very young, or individuals that have allergies.

Want our pest control pros to call you?
​Fill out the form below

Scorpions are nocturnal and prefer temperatures less than 100 degrees Fahrenheit. Therefore they seek out dark, cool and damp places, so it’s no wonder the areas in and around our homes are so attractive to them.

Scorpions live and hide in areas that are sheltered from the sun like piles of leaves, under stones, in wood piles, and around shrubs and bushes. Eliminating these harborages in your yard will go a long way toward getting rid of scorpions.

To eradicate a scorpion infestation and keep them from coming back requires an aggressive and persistent combination of actions that include changing their environment, removing those currently in the home and proper and repeated use of pesticides.

scorpions can produce hundreds of offspring (called scorplings), and they can go six months without food and live up to ten years years, they are not difficult to kill or control. The Bark Scorpion is one of the most common pests in Arizona. Scorpions love hiding under river rock, gravel, tree bark, woodpiles, and in block fences and attics. 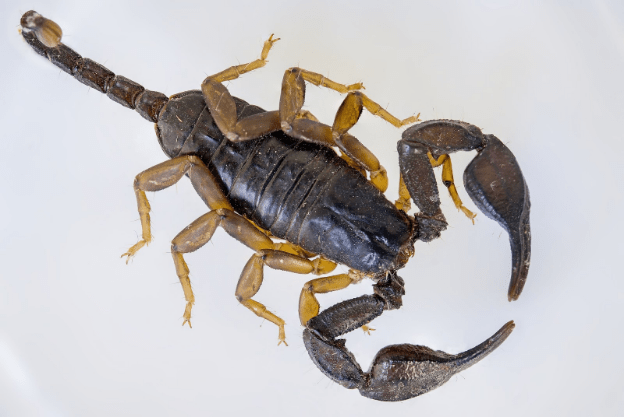 Once they have made their way inside your property, scorpions prefer to remain hidden. It is often easier to identify a potential infestation by looking for signs of activity, rather than trying to spot an actual Scorpion.

Bark scorpions, like most other scorpions, will glow when exposed to a blacklight. This is particularly useful in scorpion detection, since bark scorpions are active during the night, and can be easily spotted using this method. Typical UV LED flashlights enable their human operator to readily detect scorpions at a distance of approximately 6 feet. Newly molted scorpions will not glow under ultraviolet light for a few days after molting.

How to prevent Scorpions from entering the home

Do you already have out of control Scorpion Problem?

Natural Pest Solutions can make the process of removing scorpions a convenient and stress free because they are experts in scorpion removal. Their trained and certified technicians will inspect the outside of your home for objects that would provide an inviting home to these creatures. They will seal up cracks and openings that could provide a doorway into your home, and they will treat your house with a chemical barrier to keep scorpions from returning.